Heron on the Dock of the Bay

HERON ON THE DOCK OF THE BAY

that magical time before sunrise,

a white and gray silhouette

sweeps gracefully across the waters

on the dock not too far from me.

Over the years, I’ve noticed

the beak at the end of his elongated neck

had grown an orange tint.

His stance, stately with eyes fixed

at something in the water,

I’ve been witness to this ritual often

Perhaps, I count every now and then

the number of steps it takes to reach

as close to the beauty

not many human eyes have seen.

Each time, it has become our game

I wonder how close

to his space on the dock he would allow

my intrusion, and to what end?

After more than a decade

would I finally gain a feathered friend?

Sixteen years is long for playing

hard to get between woman and bird.

Although, I must say

the distance has been reduced,

the physical distance between us

Oh, the exquisite flight he takes,

takes my breath away

as he aims in milliseconds for his prey.

The cycle of life, nature’s ecosystem

I never tire of our dance,

the woman and bird in a seeming contract:

he feeds on nature’s wealth

in the coastal waters all the while

the moment feeds this human soul.

With his pair of long dark legs,

what else could he be?

Legs stretch out parallel to the sea

when in flight as in a feathery arabesque.

For a prima ballerina no less, a source of envy.

In late spring or early summer, he puts on

a show. He rivals October's Blue Angels over

and the shapely smoke trailing against the skies

are a close match to the heron’s dance—flying

and fights for his chosen one.

I may only be an observer on the dock

but do not blame a woman

for falling for this act of love

watching the mating ritual above,

the grandiose movement of wings,

Oh, the joy and excitement it brings.

to stop and smell the roses. And I do.

But who could ignore this gorgeous creature?

on the dock of the Bay.

I stand in awe a safe distance away

How could anyone grow tired of him?

Certainly, not this woman. Never. Not me. 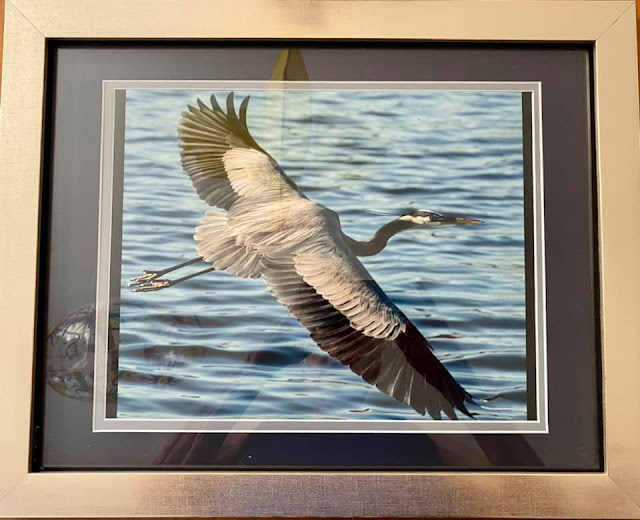 (A whimsical view of the resident heron at our marina in the San Francisco Bay.)

Note: The photo was a gift from James to our friend Sharon Jarvis who had it framed for her wall.

Popular posts from this blog

Travel and Why Not?

September 07, 2016
By Lu Sobredo WELCOME to LuTravelsAbroad Website! What's new with me? TODAY I am exploring possible format/design for my LuTravelsAbroad website, for my Blog and Facebook page. Tickled to be launching a new venture. I have this incredible feeling of drive from the top of my head to the tips of my toes. A similar feeling that came over me when I finally realized I will travel abroad again. Travel while disabled, you might ask? Why not? Mother & Son: Midnight in Paris, ©James Sobredo 2004 WHY A TRAVEL BLOG The Travel Blog and Facebook web presence is meant to be a self-help travel corner, and a vehicle for opening up about my personal health journey. When preparing for the 2016 travel, some websites and travel blogs were a great help. While in Spain as I focused on the moment and less and less on what discomfort to anticipate, I gradually experienced the thrill of traveling. It was then that I began to envision creating a one-stop self-help corner for peopl
45 comments
Read more

September 19, 2017
by Lu Sobredo Viewing Philippine Art at the Asian Art Museum. ©Lu Sobredo 2017 "Celebrate the rich diversity of Philippine art with 25 compelling works recently added to the Asian Art Museum’s collection. Expressive indigenous carving, jewelry and textiles; Christian devotional statues from the Spanish colonial period; postwar genre and landscape paintings; and contemporary works come together in this intimate exhibition to tell fascinating and complex stories of the Philippines.” ~ Asian Art Museum Introduction I’m surprised to be hanging out on a Thursday afternoon at the Asian Art Museum in San Francisco in the middle of summer. Most times, I am there either appreciating some permanent exhibit or being drawn to a special exhibit or event. Sometimes, I could be found simply sitting at the museum Cafe sipping green tea and lingering over an apple almond tart. It is at these moments when I am moved to write. The writing I do these days is for my blog.
2 comments
Read more

Through His Camera Lens: Lights, Landscapes and Life Abroad

October 19, 2017
by Lu Sobredo ~Celebrating the many dimensions of my husband James Sobredo: his interest, talent and heart as reflected through his camera lens. Introduction Yes, my son and I, and sometimes our friends take very good pictures with our mobile phones. But the person, whose camera lens I totally rely on to document life's moments and special places, is my husband James Sobredo. Being around him and his photography partner and close friend, Steven Montalvo when on their photography shoots, is both meditative and exhilarating to watch. As if their eyes are connected to their hearts. And after many hours and enormous patience, they might be happy with the outcome. I know I am. Folks have asked me why I find blogging so much fun? Other than the fact that: My family actually have visited the amazing places I write about. I get to meet fascinating people and who have become part of my family’s life.  As strange as this sounds, it’s even fun to awkwardly attempt speaking a d
10 comments
Read more

Top 10 Restaurants We Love in Spain

March 03, 2018
By Lu Sobredo Gastronomy and Spain have become synonymous. Writing this photo essay makes me think of scrumptious meals. My mouth is literally watering with great longing to return.   Since starting my blog in 2016, my husband and I are often asked for recommendation of places to eat when in Spain. I have given recommendations in a private message through my travel Facebook Page: Lutravelsabroad . And I do it happily. But there is no reason to keep our recommendations private. When one finds a gold mine, I believe it is important to share the wealth. My family and I have managed to partake in culinary feasts on a budget when traveling. When we do some modest splurging, it is all planned and calculated into our travel expense. Why not live a little while we still can? If curious, you can still access my first Blog post on the subject: Happy Eating on a Budget in Spain . This earlier essay takes you from the Madrid area and Barcelona, to the Galician region in Santiago de
2 comments
Read more

Walking the Camino de Santiago: Pilgrimage on My Terms (Parts 1 & 2)

May 03, 2017
By Lu Sobredo PART I Introduction Walking near the border of France and Spain through the Spanish Pyrenees to the city of Santiago de Compostela was not the vacation I envisaged, not for my first trip to Spain in 2010. However, my husband James, the avid adventurer had other ideas born out of an earlier visit to Madrid and Seville in 2006. It was a decision that turned out to be monumental for the family and deeply personal for me. Mother and Son Bonding on the Camino. ©James Sobredo This essay is sprinkled with practical hints from lessons learned in the pilgrimage. It is a personal reflection of the whole experience. It is about the physically challenging, emotionally invigorating, and spiritually uplifting journey. It was an experience made increasingly significant because of a life-changing diagnosis that followed three years later, a diagnosis that has rendered me chronically disabled. I sincerely hope this serves as an important reminder to all: act no
2 comments
Read more

August 24, 2019
GREAT FRIENDS MAKE GREAT MEDICINE By Lu Sobredo There is a new drug in my health journey: a daily dosage of friends. When added to my pharmaceutical regimen, it seems to magically expand the time between flare-ups. Closest Best Friend, My Beloved: Our 26th Wedding Anniversary at The Kitchen in Sacramento. ©James Sobredo The stores were about to close when I was struck with a yen to pick up bowtie pasta at the Italian Deli in my neighborhood. It’s not every day that I make an impromptu dash to the store. Once there, it’s never just bowtie pasta that finds its way into the shopping cart. Just ask my young, adult son who drove me there. It wasn’t going to be a quick trip after all. I ran into my primary care doctor and his lovely wife at the grocery store. She has a PhD and rightfully has the title of Dr., I thought to myself. My M.D. asked about my recent visit with my neurosurgeon. Aside from a chronic illness, I also had a mass in my r
Post a Comment
Read more

January 08, 2019
WORLD IN MOTION: PART I A health storm descended on my family's lives... By Lu Sobredo The southeasterly wind howled. What has angered it so? The rain wasn’t happy either. The deluge   pounded against the wall near where I slept. There was swaying for sure. Or was I having one of those episodes that compelled my husband to drive me to a nearby hospital? We both agreed my symptoms were alarming enough that warranted a run to the emergency room.   I slowly opened my eyes to get my bearings. Still too dark to be morning. The light from the digital clock reminded me we spent the night in our sailboat. It was 3 a.m., Sunday January 6, 2019. Epiphany Sunday, the feast day for christians to commemorate when God the incarnate revealed as Jesus Christ to the Magi—The Three Kings. Somehow, I felt the Universe was speaking to me in kind words despite the tempestuous weather. Our boat was safely moored. However, the wrath of the storm hitting Northern California made itse
2 comments
Read more

Lu Travels Abroad
Sausalito, California, United States
is a blog by Lu Sobredo. She celebrates life & health journey through travel, and blogs about the experience. Her chronic illness does not define her. Photos are by husband James Sobredo, a university professor emeritus who is also known for his photography.